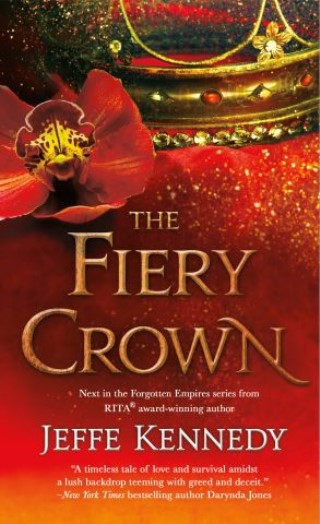 A desperate alliance. A struggle for survival. And a marriage of convenience with an epic twist of fate come together in Jeffe Kennedy's The Fiery Crown.

WILL THEIR LOVE STAND THE TEST OF TIME

Queen Euthalia has reigned over her island kingdom of Calanthe with determination, grace, and her magical, undying orchid ring. After she defied an empire to wed Conrí, the former Crown Prince of Oriel—a man of disgraced origins with vengeance in his heart—Lia expected the wizard’s prophecy to come true: Claim the hand that wears the ring and the empire falls. But Lia’s dangerous bid to save her realm doesn’t lead to immediate victory. Instead, destiny hurls her and Conrí towards a future neither could predict…

OR TEAR THEIR WHOLE WORLD APART?

Con has never healed after the death of his family and destruction of his kingdom—he’s been carefully plotting his revenge against his greatest enemy, Emperor Anure, waiting for the perfect opportunity to strike. When Lia’s spies gather intelligence suggesting that Anure is planning an attack against Calanthe, Con faces an agonizing choice: Can he sacrifice Lia and all she holds dear to destroy the empire? Or does his true loyalty exist in the arms of his beguiling, passionate wife—’til death do they part?

The Forgotten Empire series is:

Jeffe Kennedy is an award-winning, bestselling author who writes fantasy with romantic elements and contemporary romance. She serves on the Board of Directors for SFWA as a Director at Large.

Her recent works include the high fantasy trilogy from Rebel Base books, The Chronicles of Dasnaria, in the same world as her award-winning fantasy series The Twelve Kingdoms and The Uncharted Realms. She is a hybrid author, and also self-publishes a romantic fantasy series, Sorcerous Moons. Her books have won the RT Reviewers’ Choice Best Fantasy Romance of 2015, been named Best Book of June 2014, and won RWA’s prestigious RITA® Award in 2017. The The Uncharted Realms novella, The Dragons of Summer, is also a RITA finalist in 2019.

Jeffe can be found online at her website, every Sunday at the SFF Seven blog, on Facebook, on Goodreads and on Twitter. She is represented by Sarah Younger of Nancy Yost Literary Agency.