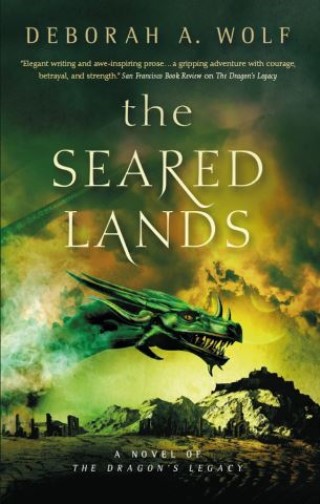 The concluding novel in the Dragon's Legacy trilogy as the world descends into war and the conflicts may awaken the Earth Dragon--leading to total destruction.

Sulema Ja'Akari, heir to the throne of the Dragon King, lies near death, imprisoned by her half brother Pythos. To survive, she must agree to rescue the one person who holds the key to unseating the usurper--a quest that will take Sulema across the vast, apocalyptic desert of the Seared Lands.

Overwhelmed by the responsibility, Sulema seeks to flee, but is captured and cast into the arena. There she must fight to the death against Kishah, whose very name means "vengeance." Kishah, who is Sulama's closest friend and fellow warrior, Hannei.

Across the world, vast forces gather. Fleeing a swarm of invaders, the child queen Maika seeks to lead her people across the wasteland to safety. Jian the half-breed prince musters an army from the Twilight Lands, while Ismai the Lich King gathers an undead horde, determined to reclaim the Dragon crown.

Yet the greatest threat lies below. Sajani the earth dragon stirs. If she wakes, the world will be destroyed. Only the heir to the Dragon King may sing Sajani back to sleep... if there still is time.

Deborah A. Wolf: Deborah A. Wolf has some personal knowledge of life as a barbarian warrior, having grown up in a wildlife refuge in Alaska. She later worked as an Arabic linguist for the U.S. Army. Before Wolf's formative years in Alaska, she spent some of her early years on a deserted island. Wolf has a love of different cultures where she can use those settings to create giant monsters, as well as flora and fauna. Deborah currently lives in northern Michigan.