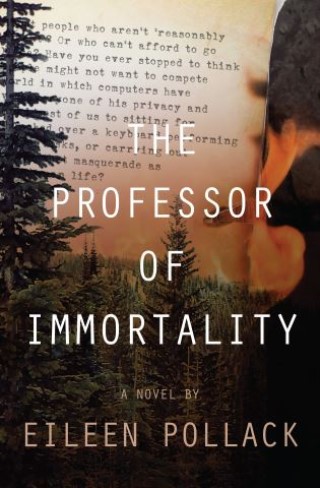 The Professor of Immortality

Professor Maxine Sayers once found her personal and professional life so fulfilling that she founded the Institute for Future Studies, a program dedicated to studying the effects of technology on our culture and finding ways to prolong human life. But when her beloved husband dies, she is so devastated she can barely get out of bed. To make matters worse, her son, Zach, abruptly quit his job in Silicon Valley and has been out of contact for seven months.

But Maxine is jolted from her grief by her sudden realization that a favorite former student (and a former close friend of her son) might be a terrorist called the Technobomber and that Zach might either be involved in or has become a victim of this extremist’s bombing. Deserting her teaching responsibilities, her ailing mother, and an appealing suitor, Maxine is compelled to set out in search of her son in order to warn and protect him—even though she knows she should report her suspicions to the FBI to prevent greater carnage.

“The Professor of Immortality is intimate and sweeping, funny and terrifying, and most of all dead-on in its observations of what it means to want to know everything about people we love while still being frightened of what we might find out: it’s a detective story, and a story of motherlove. Eileen Pollack is a splendid writer.” —Elizabeth McCracken, author of Bowlaway

“In this exceptional novel, Eileen Pollack writes with great immediacy about the impact of grief on a parent’s perception of the world. Tender, wry, full of unexpected revelations, The Professor of Immortality gripped me from the first scene, and the urgent questions it poses have stayed with me.” —Idra Novey, author of Those Who Knew

Eileen Pollack:
Eileen Pollack grew up in Liberty, New York. She has received fellowships from the Michener Foundation and the MacDowell Colony, and her stories have appeared in Ploughshares, Prairie Schooner, the Literary Review, the AGNI Review, Playgirl, and the New Generation. She lives in Belmont, Massachusetts, and teaches at Tufts University. She won the Pushcart Prize for her story “Past, Future, Elsewhere.”