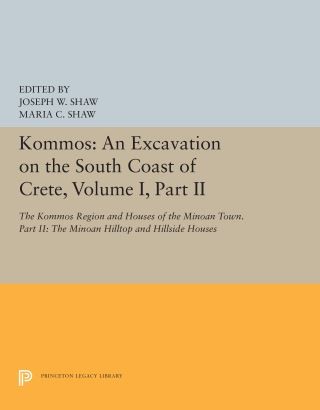 Kommos: An Excavation on the South Coast of Crete, Volume I, Part II

The Kommos Region and Houses of the Minoan Town. Part II: The Minoan Hilltop and Hillside Houses

Kommos, located on the south coast of Crete, is widely known for its important sanctuary of the Greek period for its earlier role as a major Minoan harbortown. Volumes II and III in this series, dealing with the Minoan pottery, have already been published. Volume I, Part I (1995), offered a general introduction to the site, followed by chapters on the archaeological exploration of the area, its geology, fauna and flora, land use, as well as on the Minoan implements and indsutries. Now Volume I, Part II introduces the Kommos town (Joseph W. Shaw), and analyzes and interprets the houses on the hilltop (Maria C. Shaw and Lucia F. Nixon) and hillside (James C. Wright and John McEnroe). There is a catalog of miscellaneous finds from the houses (Mary K. Dabney, Katherine A. Schwab, Maria C. Shaw, John Bennet, Helene Whittaker, David Reese, and Olga Kryszowska), followed by synthetic chapters on town planning and domesetic architecture (Maria C. Shaw) and site development (Joseph W. Shaw). Combined, the interrelated Kommos volumes present an unusually thorough, interdisciplinary interpretation of a prehistoric site in Greece.
An excavation by the University of Toronto and the Royal Ontario Museum under the auspices of the American School of Classical Studies in Athens.

The Princeton Legacy Library uses the latest print-on-demand technology to again make available previously out-of-print books from the distinguished backlist of Princeton University Press. These editions preserve the original texts of these important books while presenting them in durable paperback and hardcover editions. The goal of the Princeton Legacy Library is to vastly increase access to the rich scholarly heritage found in the thousands of books published by Princeton University Press since its founding in 1905.