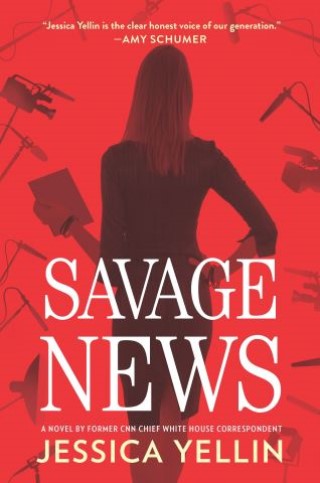 “Jessica Yellin is the clear honest voice of our generation.”-Amy Schumer

Be noisy. Natalie Savage grew up hearing these words from her beloved father, who admired Walter Cronkite so much he named the family dog after him. Natalie—who spent her twenties missing out on life’s benchmarks—finally sees her efforts pay off when she’s assigned to cover the White House for her network, ATN. The problem? The position is only temporary, a test to see if she has what it takes. She has always relied on her grit, her principles and her news sense to gain success. But now her competition is a twenty-six-year-old spoiled frat boy who got his big television break by eating raw animal parts on a reality show.

Natalie, along with her scrappy production team, has to navigate ratings wars, workplace sexual harassment and an international political crisis in order to prove herself. But the closer she gets to achieving her dream job, the more she wonders if it is worth all the compromise.

Timely, funny and smart, this juicy debut is the perfect tonic for readers contending with today’s politics and the #MeToo movement. Natalie Savage will be sure to join the ranks of our favorite fictional heroines as she figures out that having it all doesn’t mean giving up everything she stands for.

Jessica Yellin: Jessica Yellin is the Emmy and Gracie award winning former Chief White House Correspondent for CNN. She's interviewed Presidents Obama, Clinton and Bush and reported from around the world. Her first novel, Savage News, will be published by HarperCollins Spring 2019. She broadcasts daily news reports on Instagram. Her mission: deliver quality reporting and analysis that leaves the audience feeling informed and empowered. Follow her on Instagram @JessicaYellin.