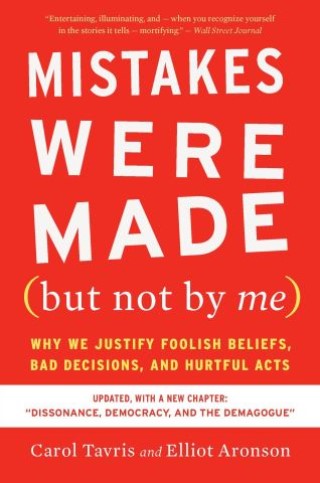 Mistakes Were Made (but Not by Me) Third Edition

Why We Justify Foolish Beliefs, Bad Decisions, and Hurtful Acts

Renowned social psychologists Carol Tavris and Elliot Aronson take a compelling look into how the brain is wired for self-justification. When we make mistakes, we must calm the cognitive dissonance that jars our feelings of self-worth. And so we create fictions that absolve us of responsibility, restoring our belief that we are smart, moral, and right—a belief that often keeps us on a course that is dumb, immoral, and wrong.

Carol Tavris:
CAROL TAVRIS is a social psychologist, lecturer, and writer whose books include Anger and The Mismeasure of Woman. She has written on psychological topics for the Los Angeles Times, the New York Times, Scientific American, and many other publications. She is a fellow of the American Psychological Association and the Association for Psychological Science, and a member of the editorial board of Psychological Science in the Public Interest. She lives in Los Angeles.
ELLIOT ARONSON is one of the most distinguished social psychologists in the world. His books include The Social Animal and The Jigsaw Classroom. Chosen by his peers as one of the hundred most influential psychologists of the twentieth century, he was elected to the American Academy of Arts and Sciences and is the only psychologist to have won all three of the American Psychological Association’s top awards—for writing, teaching, and research. He lives in Santa Cruz, California.